On 30 July 2021, SIDRA and TNLF (Transnational Law Frontiers) jointly presented a webinar introducing the dispute settlement mechanisms in the China-EU Comprehensive Agreement on Investment (CAI). Chunlei Zhao (Postdoctoral Fellow, Institute for International Dispute Settlement, Tsinghua University) introduced the state-state dispute settlement in the existing CAI, the mechanism to address differences on matters covered under the sustainable development section, and ways of settling investor-state disputes that might be agreed upon by China and the EU. Yueming Yan (Global PhD Fellow at SIDRA) acted as a moderator. The panellist and attendees engaged in a lively discussion on multilateral investment court, confidentiality, alternative dispute resolution as well as China’s attitudes towards international dispute resolution and its practices along the implementation of the Belt & Road Initiative. Moderated by Guy Pendell, speakers Philippa Charles, Abraham Vergis SC, Darius Chan, Jelita Pandjaitan and Koh Swee Yen shared their views at this session. The distinguished speakers spoke about the rise of Singapore as a preferred seat and the reasons and factors for its success. They also discussed whether Singapore has what it takes to maintain its ranking and the implications of Singapore and Hong Kong (which also gained popularity compared to its 2018 ranking) as preferred seats for businesses, law firms and lawyers. Finally, having regard to where arbitrations are being seated, the session also touched on what young arbitration practitioners should take into consideration as they develop their practice. On 3 June 2021, SIDRA hosted a webinar on China’s Investment Treaty Policy and Practice: Arbitration Clauses limited to Compensation due to Expropriation. Allison Goh (Research Associate, SIDRA) acted as moderator. Dr. Matteo Vaccaro-Incisa (Head, International Law & Arbitration, Carnelutti Law Firm) provided an in-depth examination of arbitration clauses limited to compensation due to expropriation in China’s investment treaties, and explored the limitations of such clauses. In doing so, Dr. Matteo compared and evaluated the relevant case law, including court decisions from Singapore, Stockholm, and London. Jonathan Lim (Counsel, WilmerHale) provided commentary from a practitioner perspective. As experienced counsel in both commercial and investment arbitrations across common law and civil law jurisdictions, Jonathan raised thought-provoking issues and the webinar concluded with insightful comments from both speakers. YSIAC-CIArb YMG Webinar: Popular or Polar Opposites? Perceptions about Arbitration Practice from the US and Singapore 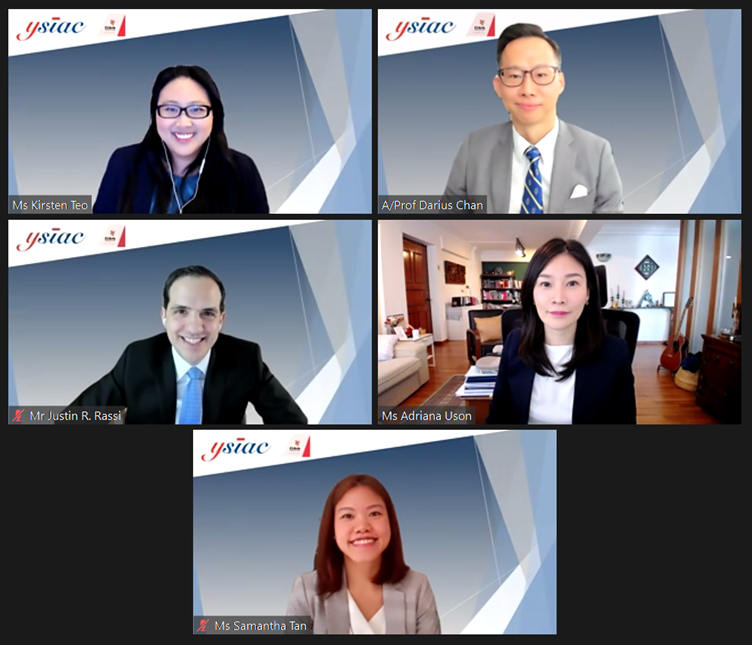 Darius Chan (Associate Professor of Law, SMU Yong Pung How School of Law, Deputy Director of SIDRA) spoke at the YSIAC-CIArb YMG Webinar on 7 May 2021. The webinar titled ‘Popular or Polar Opposites? Perceptions about Arbitration Practice from the US and Singapore’ allowed panellists, Darius Chan, Justin R. Rassi (Associate, Debevoise & Plimpton), Samantha Tan (Senior Associate, Freshfields Bruckhaus Deringer) and Kirsten Teo (Senior Legal Consultant, De Almeida Pereira DC) to exchange perspectives about the practice of arbitration from various parts of the globe, focusing on how clients and lawyers in the US and in Singapore perceive arbitration. The discussion touched on the effectiveness of arbitration as a mechanism for dispute resolution, the enforceability of arbitral awards, and Singapore common law versus US common law practice in various areas of arbitration. The panellists also discussed their experiences in practice and networking.  The diverse audience consisted of arbitrators, in-house counsel, legal practitioners, and students. The engaging discussion was moderated by Adriana Uson (Head (Americas), Singapore International Arbitration Centre). On 30 March 2021, SIDRA presented a webinar on practical tips for younger practitioners on China-related disputes. The webinar focused on a practitioner perspective with regards to China-related disputes. The distinguished speakers included Crystal Wong (Partner, Lee Hishammuddin Allen & Gledhill), Nelson Goh (Senior Associate, Debevoise & Plimpton) and Sophia Feng (International Counsel, Allen & Gledhill). The speakers shared their practical experiences and anecdotes, having represented Chinese clients in various jurisdictions, including the United Kingdom, Malaysia, China, and Singapore. The discussion touched on the entire life cycle of a dispute, from pitching clients, the pre-trial process, the proceedings and finally, the enforcement process. The lively and interactive session was moderated by Rachel Tan (Research & Development Operations Lead, SIDRA). 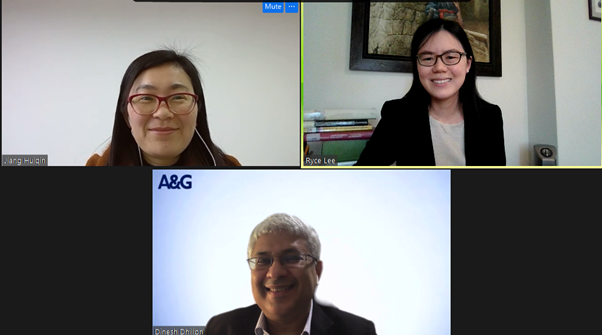 The Regional Comprehensive Economic Partnership (RCEP) is the world’s largest Free Trade Agreement. Members include the 10 ASEAN nations, Australia, China, Japan, New Zealand, and South Korea. Together, the RCEP members comprise nearly 30% of the global population and global GDP.  The RCEP is relevant to BRI dispute resolution because of China’s involvement. The RCEP is an instrument that both outbound and inbound investors along the BRI can tap on, and the RCEP has its own set of dispute settlement mechanisms.

On 4 February 2021, SIDRA and UNSW Law & Justice’s Herbert Smith Freehills China International Business and Economic Law (CIBEL) Centre jointly presented a webinar introducing the RCEP. The webinar provided participants with an overview on the RCEP’s trade implications, with a specific focus on its impact on international dispute settlement in the region. Heng Wang (Professor at UNSW Law & Justice, Co-Director of HSF CIBEL Centre) introduced participants to the RCEP and its trade implications. Mark McLaughlin (Global Visiting Assistant Professor at SMU) discussed investment protections under the RCEP. Kun Fan (Associate Professor at UNSW Law & Justice) delved into the RCEP's implications on international dispute settlement. Guillermo García-Perrote (Senior Associate at Herbert Smith Freehills) provided commentary from a practitioner perspective, as an international arbitration lawyer specialising in infrastructure and energy disputes. Allison Goh (Research Associate, SIDRA) acted as moderator. The webinar concluded with questions from webinar attendees and a lively discussion among the panellists, touching on topics such as investor-state dispute settlement mechanisms, the function of parallel multilateral treaties in the region, the role of the Singapore Convention in expediting the use of mediation and further discussion on the trade implications of the RCEP. The webinar was well-received by participants hailing from 21 countries and territories around the world. On 29 January 2021, SIDRA co-organised a webinar, moderated by Kevin Tan (Partner, Rajah and Tann Singapore LLP), welcoming distinguished panellists Ng Jern-Fei QC (Queens’ Counsel, Essex Court Chambers) and Chen Xiaoshan (Partner, DLA Piper Shanghai) and Chan Wei Jian (Barrister, Essex Court Chambers).  This webinar featured BRI dispute resolution and explored the substantive similarities and differences between how Chinese law and the common law (eg, English, Hong Kong and Singapore law) would handle different issues relating to both liability and quantum that would arise in disputes, especially against the context of the current Covid-19 pandemic.  Practical suggestions for dispute prevention were discussed, such as the use of certifying documents, including the China Council for the Promotion of International Trade (CCPIT) force majeure certificates as proof of the facts related to force majeure in disputes governed by PRC law, and how indeterminacy arising because of COVID-19 could potentially be managed as a matter of procedure.

On 5 November 2020, SIDRA and the British Institute of International and Comparative Law (BIICL) jointly presented a webinar on the Implications of China’s Doctrine of Strict State Immunity on Belt & Road Disputes. Charles Tay (Singaporean-qualified lawyer, Zhong Lun Law Firm) provided participants with an overview of the concept of strict state immunity and potential applications in relation to disputes under the Belt and Road. Chiann Bao (Independent Arbitrator and Honorary Senior Fellow of BIICL), provided commentary from her perspective as a seasoned arbitrator currently based in Hong Kong. Duncan Speller (Partner, Litigation/Controversy Department, WilmerHale), provided his perspective as counsel who has been involved in some of the leading cases on state immunity issues, in multiple jurisdictions including England and the DIFC. The webinar also dealt with effects of crown immunity in Hong Kong, immunity disputes that may arise in the BRI context in relation to state-owned-enterprises and issues of waiver and other possible mechanisms for dealing with immunity. The thought-provoking webinar was moderated by Allison Goh (Research Associate, SIDRA). The webinar was attended by dispute resolution practitioners, in-house counsel, academics, and students from 22 countries and territories around the world.

This webinar jointly organised by SMU and Fudan focused on Dispute Resolution, and in particular, dealt with comparative analysis between Chinese law and common law.  Specifically, Darius Chan (SMU) spoke on issues concerning the governing law of the arbitration agreement, using a case study involving parties arbitrating a dispute in Shanghai, and showcasing how that case had spawned decisions in both the Singapore and Chinese Courts. Dr. Xiong Hao (Associate Professor, Fudan Law School) in turn spoke about developments on the use of mediation in China, and his thoughts on whether the Singapore Convention could take off. Dr. Cai Congyan (Professor, Fudan Law School) spoke about the judicial training and upskilling of judges in China to handle international disputes. On 9 October 2020, SIDRA hosted a webinar on China and International Adjudication, focusing on China's approach in its investor-state and inter-state disputes. Professor Chester Brown (Professor of International Law and International Arbitration, University of Sydney Law School, Barrister at 7 Wentworth Selborne Chambers and Essex Court Chambers) spoke on litigation and arbitration and Dr. Mark McLaughlin (Global Visiting Assistant Professor, SMU School of Law) discussed mediation and dispute resolution mechanisms under the Belt and Road Initiative. The panellists also provided their perspectives on key investor-state cases to which China has been a party. Moderated by Rachel Tan (Research & Development Operations Lead, SIDRA), the panellists and participants engaged in a lively discussion on conciliation and mediation as well as China's approach to investor-state dispute settlement, before the webinar came to a close. On 17 September 2020, SIDRA and International Trading Institute (ITI) jointly presented a webinar on the Belt and Road Initiative: Maritime Silk Road. Dr. Mark McLaughlin (Global Visiting Assistant Professor, SMU School of Law), kickstarted the discussion with an introduction to the Maritime Silk Road. Punit Oza (Registrar of Singapore Chamber of Maritime Arbitration, Board member of Klaveness Asia Pte Ltd) and Louisa Follis (Senior Analyst, Clarksons Platou), provided their perspectives as seasoned shipping and maritime experts, on the commercial impact of the Maritime Silk Road on shipping routes and trade. The webinar was moderated by Baldev Bhinder (Managing Director, Blackstone & Gold), a legal expert in the commodities sector. The webinar concluded with a lively Q&A with webinar participants, as the panellists shared their concluding thoughts on the Maritime Silk Road and its foreseeable impact on trade, business and dispute resolution in the region. On 10 September 2020, Allison Goh (Research Associate, SIDRA) and Shouyu Chong (Research Fellow, SIDRA) were selected to speak at the Conference on Public-Private Law Approaches to the COVID-19 Pandemic, hosted by SMU School of Law.  Under Session 5 dealing with “Commercial Law and Litigation in Extraordinary Times” chaired by Dr Ardavan Arzandeh of the University of Bristol, Allison Goh presented a paper with the theme “Technology as the New Normal: Challenges and Implications for Dispute Resolution under the Belt and Road Initiative”, where she surveyed the increasing role technology was playing in BRI dispute resolution, and in particular, among Chinese arbitral institutions.  Shouyu, on the other hand, presented on “International Commercial Litigation of Contractual Disputes Precipitated by the Covid-19 Economic Crisis”. 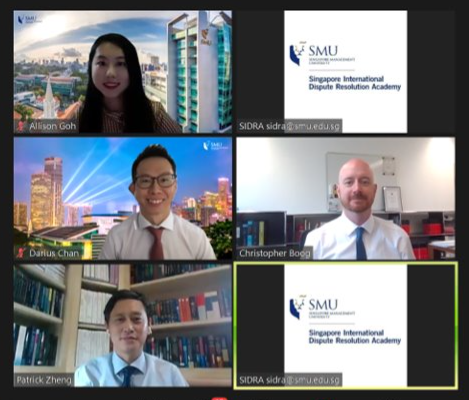 On 14 July 2020, SIDRA held a webinar on Conflict of Laws in BRI Disputes: A Comparative Approach. Panellists Professor Darius Chan (Deputy Director of SIDRA, Director of SMULA), Dr. Christopher Boog (Vice Chair of International Arbitration Practice Group, Schellenberg Wittmer), and Patrick Zheng (Head of Dispute Resolution Practice, LLinks Law Offices) discussed conflict of laws issues in the BRI context. The event was moderated by Allison Goh (Research Associate, SIDRA), and saw participants tuning in from 27 countries and territories around the world. The panellists discussed conflict of laws issues relating to determination of the law of the governing contract, the law of the arbitration agreement, and the competing choices of law in interim measures. The webinar provided a substantive, yet practice-oriented review of the approach taken in relation to resolving conflict of law issues from the common law, Chinese, Swiss, and German law perspectives.